How and Why Dogs Play

Play, by definition, is fun. When play stops being fun it stops being play. Play is a pleasurable activity during which animals engage in behaviors that are not part of the immediate business of life, but rather are performed in mimicry, rehearsal or display. During play, dogs behave without real seriousness – running, jumping, chasing, mouthing, chewing, wrestling, biting, hiding and even humping. In play, all behaviors are a game to the players and are performed for fun. There is no hidden agenda. 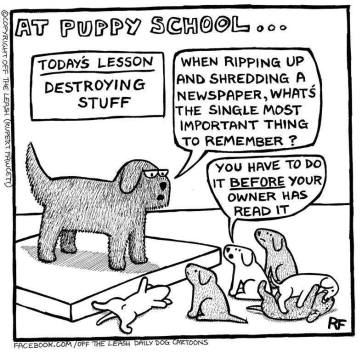 Dogs have a unique gesture, the play bow, that signals “play mode.” The signal involves dogs going down on their elbows with their rear end elevated, tail raised and wagging. During such posturing, they have on their “play face,” with mouth open and ears pricked. They may bark to signal their wish to solicit another’s involvement, and may approach or withdraw from a potential play partner while pouncing and leaping about.

Play is usually, but not always, between two or more individuals. Sometimes dogs without partners will play by themselves. Solitary play is a rather sad event and may even have unwanted long-term repercussions.

Why Do Dogs Play?

It has been suggested that play is a necessary part of growing up for all young social animals and that without it they may not develop to their full potential. This does not appear to be the case, as animals deprived of play for reasons of sickness or ill health grow up to be behaviorally indistinguishable from their play-satiated peers. This is not to say that “players” may not develop more rapidly than their play-deprived peers, just that the end result often turns out to be more or less the same.

If play is not absolutely imperative for normal development to develop, what good is it? Well, play is a role-playing rehearsal for adult behaviors and as such will prepare a youngster for what lies ahead. During play, pups exercise their bodies and minds, making them healthier and smarter for it. In nature, this may give players the edge over their unrehearsed counterparts who may be still struggling to learn the Ps and Qs of canine etiquette or the rudiments of the chase. Note that different types of play unfold in parallel with sensitive periods of learning, so that play learning is most efficient. Mouthiness is first seen at 3 weeks of age, right after the transitional period. Then come play solicitation, play fighting, scruff holding, deference, and finally sexual play.

All these forms of play start in the socialization period between 3 and 6 weeks of age and they intensify as the pup approaches adolescence. Object play, chewing and chasing objects, occurs a little later, becoming most intense after about 16 to 20 weeks of age.

Social skills are honed by playful interactions between individuals. One pup may jump on another pup, pin him, and then mouth him around the head and neck. If the pressure of the pup’s bite exceeds tolerable limits, the temporary underdog will roll over, yelp or run away. Both parties learn an important lesson. The biter learns to inhibit his bite if he wishes the fun to continue, and the pup that is bitten learns that deference or escape will cause the unpleasant experience to come to an end. Of course, sudden role reversal is also a feature of play, with provisional subordinates suddenly becoming pursuers and “attackers.” A happy medium is reached when truly dominant dogs learn their gift for mastery, and subordinates learn how to avoid or deter unpleasant exchanges. This dynamic may explain why dominant dogs are less successful than their subordinates in soliciting play. Aloof pups that don’t play much, and orphaned pups, often grow up to be socially inappropriate. In repelling borders, they may send a message that is too profound, failing to inhibit their bite – and they may not be able to deliver convincing messages of deference.

This mostly takes the form of mounting, clasping and pelvic thrusting (“humping”). The lack of seriousness is indicated by the somewhat haphazard orientation of this behavior, initially. Male and female pups are equally likely to be targeted, or in their absence, peoples’ legs and cushions may have to suffice. Dogs that have had no humping experience will not be as immediately successful in mating as previously rehearsed counterparts. Also, dogs without playmates may imprint on inanimate objects or human appendages as substrates for humping behavior, and become an embarrassment to own if not neutered. In addition, the relationship between humping and dominance must be born in mind if the correct human-companion animal relationship is to be preserved.

Young puppies have a biological need to mouth and chew malleable objects. It seems to give them almost undue pleasure. Unlike social and sexual play, this type of play does not require a partner, though socially-testing tug-of-war games sometimes evolve as a spin off. Of course, by teething time, at around 6 to 8 months of age, object chewing becomes an extremely useful adjuvant to assist with tooth loosening and dental eruption, and may even provide some relief from gingival discomfort.

Chasing moving objects is a sure way of fine-tuning predatory skills. Ball chasing, stick chasing, and leaf chasing, are all ways in which this play form is expressed. With appropriate opportunity and guidance, pups will learn the ins and outs of the chase – how to accelerate, turn on a dime, brake suddenly, and how to pounce with accuracy and alacrity. If deprived of play predatory opportunities, dogs may resort to vacuum chasing of imaginary creatures, may pace, circle, or chase their own tails. This is a sad state of affairs.

In many species, like wolves, play is pretty much restricted to juveniles and adolescents. Adults do not normally have the time or energy to waste in such trivial pursuits. Domestic dogs, however, seem to be enduringly suspended in a juvenile frame of mind. Thus play is not something they outgrow but rather an activity they keenly pursue throughout their lives. Unhealthy and unhappy dogs do not play, so play serves as a barometer of well being, indicating that a dog is well fed, in good health, and content. Dogs, like humans, do not play when they’re sad or distressed. Dogs that do not seem to enjoy playing should be carefully scrutinized to make sure all is well in their lives.