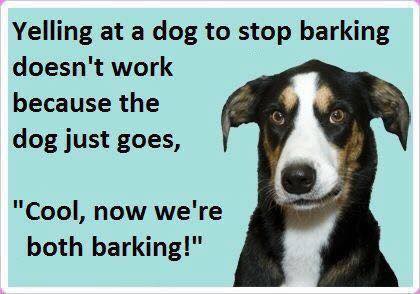 Barks, growls, howls, whines, and whimpers-your dog is talking to you, and he’s got a lot to say!

The bark of a distressed dog, such as a dog who suffers from isolation or separation distress or anxiety, is high-pitched and repetitive; getting higher in pitch as the dog becomes more upset. Boredom barking tends to be more of a repetitive monotone. Alert bark is likely to be a sharp, staccato sound; alarm barking adds a note of intensity to the alert.

Demand barks are sharp and persistent, and directed at the human who could/should ostensibly provide whatever the dog demands. At least, the dog thinks so. Suspicious barks are usually low in tone, and slow, while fearful
barking is often low but faster. Play barking just sounds . . . playful. If you have any doubt – look to see what the dog is doing. If he’s playing, it’s probably play barking.

Baying is deep-throated, prolonged barking, most often heard when a dog is in pursuit of prey, but also sometimes offered by a dog who is challenging an intruder. The scent hounds are notorious for their melodic baying voices.

Growls are most often a warning that serious aggression may ensue if you persist in whatever you’re doing, or what-ever is going on around him. Rather than taking offense at your dog’s growl, heed his warning, and figure out how to make him more comfortable with the situation. Dogs also growl in play. It’s common for a dog to growl while playing tug – and that’s perfectly appropriate as long as the rest of his body language says he’s playing. If there’s any doubt in your mind, take a break from play to let him calm down. Some dogs also growl in pleasure. Rottweilers are notorious for “grumbling” when being petted and playing, and absent any signs of stress, this is interpreted as a “feels good” happy sound.

Howling is often triggered by a high-pitched sound; many dogs howl at the sound of fire and police sirens. Some dog owners have taught their dogs to howl on cue, such as the owner howling.

Some dogs howl when they are significantly distressed – again, a common symptom of isolation and separation distress.