Bonding with Your Puppy 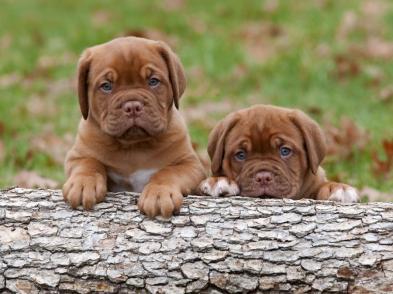 When a puppy is born, it knows nothing of the world around it. However, it knows enough to stay close to its mom and her milk bar. The only important task for the pup during the neonatal period is to maintain a degree of physiological balance. Nursing and sleeping are about all the pup is capable of at this stage.

After a week or ten days of hanging around “the great one,” the pup’s eyes and ears open and it begins to process information about the world outside. Reflexes and mother’s care have brought the pup thus far, but increasingly, know-how, including the establishment of proper relationships with others, becomes necessary for continued success in life. The first and most important relationship a pup makes is with its mom.

If a pup is separated from its mom, she will retrieve it. If it cries, she will attend to it. If it is hungry she will feed it. The pup’s trust and reliance develop quickly as mom invariably finds a way of providing for the youngster’s every need.

This mutual interaction brings satisfaction and relaxation to both the mother dog and puppy. A strong bond develops and the pup no doubt feels at one with its parent. For pups, mistrust of unfamiliar individuals begins to develop around 8-10 weeks of life and is a reflection of the pup’s strong bond with its canine family.

The original bond a pup has with its mom is the most important one it will ever have. If, when the pup cries, its mom routinely responds, it will develop confidence. If she grooms it regularly, its nervous system will positively sprout. If she’s always right there when the pup turns around for assurance, it learns trust. Well-tended pups have higher (what might be called) self-esteem, are smarter, and seem to regulate their emotions better. A “functional” pup – one that can make its own way in the world – is the end result.

Over time, a pup’s relationship with their mom progresses from one of hopeless devotion to a more voluntary affair. Their association becomes more like an enjoyable friendship between two individuals who seek each other’s company for the pleasure it brings. Somewhere along the development road, usually between 3 and 6 weeks of age, pups develop relationships with their siblings and begin to learn social etiquette from their playful interactions.

But an interpersonal cataclysm lies in waiting for most young pups. At the relatively tender age of 8 weeks, most pups are adopted by well-meaning humans, who try their best to make the pup’s transition from it mom and littermates as painless as possible. But strangers are no substitute for the pup’s own family. Some early separation distress is almost inevitable and will be witnessed by the pup’s new family as whimpering and whining, especially at night. Ill-informed friends advise, “Let the puppy cry. He’s got to learn. You don’t want to make a rod for your back, do you?” Nothing could be further from the truth.

At this stage, you (the parent stand-in) must meet all the pup’s demands, just as its mom did. This way, you keep the pup on the right track of intellectual and social development. One of the great spins-offs is that the pup will re-attach to you, its new great provider, and will turn out every bit as confident and self-sufficient as its real mom would have liked.

A researcher at Tufts University School of Veterinary Medicine set out to explore the nature of the human-animal bond between young pups and their new human caregivers. A child psychologist by profession, this researcher used a modification of the “strange situation” (SS) test employed in child psychology to plumb the depths of the bond. The setup was as follows:

Young pups and their owners were introduced to a novel environment. The environment was enriched with toys and food.

After a set time, owners were asked to leave the room for a prescribed time.

Owners were then asked to return to the room.

Pups’ reactions to their owners’ returns were monitored.

Three categories of puppy responses were noted to the SS test.

The first category of response (1) indicated that the puppy had not developed a proper bond with the new owner (under attachment).

The second category of response (2) indicated that the pup had a healthy bond with the new owner (normal attachment).

The third category of response (3) indicated that the pup was overly dependant on the owner and foreshadowed future separation distress.

Pups in response category (1) had not developed a bond with their owner because the owners had not spent enough quality time with the pups.

Owners of pups in response category (2) had most likely played their cards just right, by paying their pup attention when attention was due, providing the requisite social experiences, and protecting them from lengthy periods of time alone.

Owners of pups in response category (3) likely overindulged their pups when they were around but, for whatever reason, had left them unattended for overly long periods, either at night or when they went to work. This “emotional roller coaster” experience seems to set the stage for separation anxiety and general lack of confidence.

Imprinting, an elemental form of bonding, occurs most readily during a sensitive period of development. If the time and circumstances of an initial introduction of animals is appropriately staged, it is quite literally possible to have a lion lie down with a lamb. With this in mind, it’s almost child’s play to have a dog bond with a cat – subsequently learning to be accepting of cats in general.

All you have to do is arrange for benign introductions to occur during the sensitive period of development. The sensitive period for such learning to occur in dogs is between 3 – 12 weeks of age. During this time period, owners can engineer all kinds of useful friendships between animals of the same or different species.

As many owners already know, dogs don’t just bond to their moms or to their human owners. They can also bond with other dogs. So powerful can such bonds be between one individual and another that they may show separation anxiety or frank depression if separated.

This is not a bad arrangement until longterm separation through illness or death becomes inevitable. In such cases, dogs must be trained to develop new bonds with either other dogs (a new puppy, perhaps) or new human acquaintances. In severe cases, antidepressants may be needed to help such formerly bonded dogs around this sharp corner of life.

If all has not gone according to plan for a pup, by way of bonding experiences in early life, all is not lost. Many dysfunctional dogs who start out overly dependent on their human caregivers can be retrained to develop confidence in themselves, they can be trained to be independent i.e. to stand on their own four feet. It’s damage control, sure enough, but it works. Whatever people say, you can teach and old(er) dog new tricks, though it often takes considerably longer.

2 thoughts on “Bonding with Your Puppy”