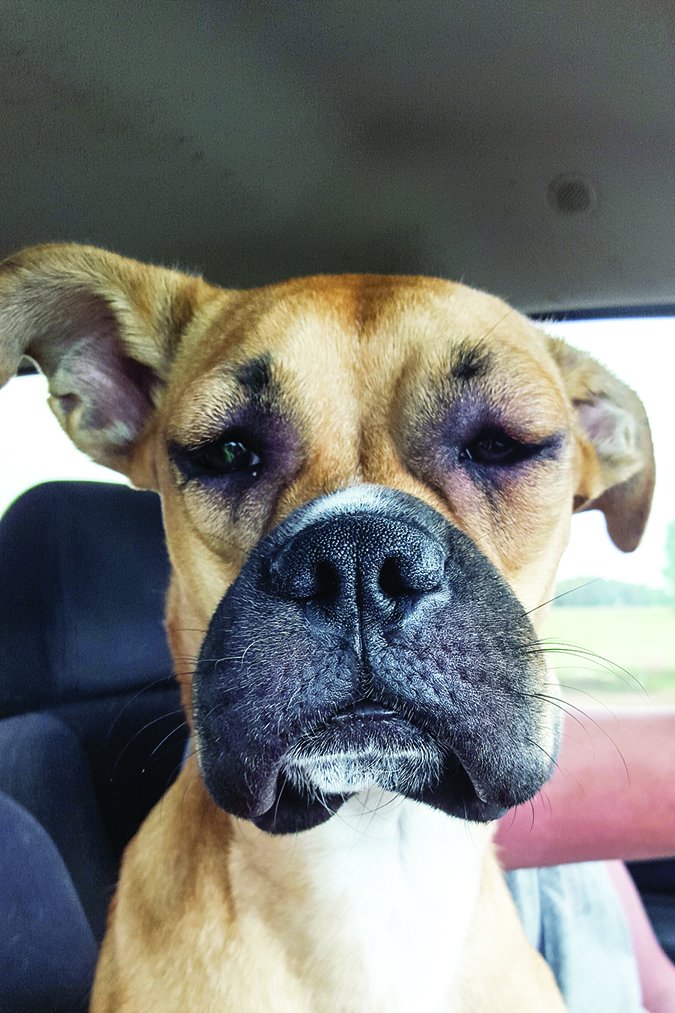 Spring is springing forth all over the country. Flowers, grasses, and trees are blooming, and the pollinators are out in force. This is great news for plants, and less great news for our canine friends. Dogs are more prone to being stung by insects than we are, given that they aren’t always aware that some of the buzzing, flying insects they love to chase can hurt!

The most likely sting suspects are the Hymenopteraspecies, which include bees, wasps, hornets, and fire ants. As an emergency veterinarian, I often treated dogs who suffered bee and wasp stings, with reactions ranging from very mild localized swelling and pain to anaphylactic shock. These symptoms were sometimes caused by a direct sting to the muzzle or paw, but in some cases, they occurred when a dog ingested a bee! It’s important to know what is normal and what is not when this happens.

The typical dog bee stinging event leaves the dog with a single sting on the muzzle or foot. This is because of dogs’ horizontal, four-footed orientation and their innate curiosity. The feet often find the insects when running through the grass, and the curious muzzle will follow.

What to Do If Your Dog Gets Stung

In the case of most stings, there will be very mild redness and swelling. Your dog may suddenly limp and/or favor a paw, or have a red, swollen spot on the face. In some cases, a stinger can still be found in the wound. This is extremely difficult to find without a still, calm dog and a magnifying glass. In some cases, removal of a stinger must be done at a veterinary office. You can try to visualize and remove it at home, but it may not be possible.

Initial treatment for a sting or bite of this severity can consist of rest and a cold compress to relieve swelling and pain. Do not administer over-the-counter medications; these are generally not safe for dogs. If you are concerned that your dog is in significant pain, contact your veterinarian to discuss a pain-management strategy.

Hives, wheals, and welts are a moderate reaction to stings. Just like their human counterparts, dogs who have been stung can break out in unsightly hives. These are usually very itchy and uncomfortable. The first sign often noticed is the dog rubbing along furniture or scratching at the face and eyes. The hives may manifest as bright red streaks or lumps all over the body or be confined to a single place.

As long as there is no attendant vomiting, diarrhea, weakness, or collapse, this can be managed at home successfully. Diphenhydramine (the active ingredient in Benadryl) can be given at 1 to 2 milligrams per pound of body weight. If using a Benadryl product, check to make sure there are NO other active ingredients. Some Benadryl products contain decongestants as well, and these can be dangerous for dogs.

In the most severe cases, dogs can develop anaphylactic shock. In canines, the shock organ is the gastrointestinal (GI) tract (in contrast to cats and humans, in which it is the lungs). Dogs in anaphylactic shock do not necessarily develop difficulty breathing. They are much more likely to develop sudden onset of vomiting, diarrhea, and collapse. The diarrhea and vomit can both be extremely bloody, in some cases.

This is an absolute emergency and should be treated as such. Once evaluated by a veterinarian, your dog will be treated with intravenous (IV) fluids, epinephrine, possibly steriods, oxygen, and very close monitoring. Diagnostic testing will likely include blood pressure monitoring, bloodwork, and maybe an abdominal ultrasound.

Often, when dogs are stung, it is not witnessed, so it can be difficult to determine the cause of the signs. Anaphylaxis can also look like an Addisonian crisis; severe, acute hemorrhagic gastroenteritis (HGE); or mesenteric volvulus. One helpful test is the abdominal ultrasound. Gallbladder wall swelling (edema) can be used to determine if anaphylaxis is the true cause of the signs. Another indicator is that anaphylaxis is a very sudden onset in a previously healthy dog that has just been outside.

With rapid and aggressive treatment, most dogs will recover from this type of shock, but early treatment is essential. In some cases, your veterinarian may recommend carrying an EpiPen Jr for future outdoor travels with your dog. Despite having this on hand, any suspicion of an anaphylactic event should prompt immediate evaluation by your veterinarian.

Initial symptoms in dogs include multiple bites, marked pain and swelling, hyperthermia (temperature can elevate to a deadly 107 degrees), heavy panting, rapid heart rate, and in some cases, muscle tremoring.

There is no antidote, so treatment is aimed at supportive care. This must be aggressive, as dogs can later develop systemic effects such as kidney failure. The kidney failure develops due to generalized muscle trauma from the stings and hyperthermia. When the muscle is damaged, extra myoglobin (a muscle enzyme) is released into the bloodstream. This must be metabolized by the kidneys, and excess amounts can cause renal damage. This will lead to a dark brown color to urine and elevated blood urea nitrogen (BUN) and creatinine.

Treatment is centered on maintaining hydration with IV fluids, pain relief medications (generally strong drugs like opioids), and close monitoring of vitals and bloodwork. NSAIDs like carprofen and meloxicam should be avoided due to the risk of kidney failure.

A different and less-common scenario is a sting to the inside of the mouth or the tongue. These stings can be more severe because of the amount of pain and swelling. In rare cases, swelling in the mouth could lead to airway inflammation, obstruction, and labored breathing. While this isn’t common, it can happen. If you know that your dog was stung in the mouth or on the tongue, monitor closely for any signs of respiratory distress. These include wheezing or other noisy breathing, coughing, and difficulty pulling air into the lungs (inspiratory dyspnea). Seek veterinary care!

In these cases, your dog may need to receive respiratory support. This might include an oxygen mask, nasal oxygen prongs, or in serious cases, where the upper airway is obstructed, the placement of an emergency tracheostomy tube. This allows the veterinarian to bypass the swollen upper airway and provide the patient with life-saving oxygen. These are temporary and will be removed when the swelling has resolved enough to allow normal respiration.

Most reactions to bee stings are mild, but it is important to recognize the more severe symptoms so that immediate treatment can be started and systemic effects minimized.

What About Killer Bees?

A special note about Africanized killer bees should be made. These are a hybrid of two honeybees: the western honey bee and the Iberian honey bee. They were hybridized in Brazil in the 1950s with hopes of increasing honey production. Unfortunately, swarms escaped quarantine and migrated through Central America and into the Southwest and Florida. These bees are still largely isolated to those areas, but with global temperatures in flux, they can be expected to spread.

Unlike the usually docile honey bee, these bees can be very easily aggravated and aggressive and even chase victims. When annoyed, they tend to attack in large swarms. Interestingly, the venom is the same as other honey bees, which are rarely fatal. It is the multiple stings that can be fatal for animals and humans.