Behaviours to Avoid During the Walk 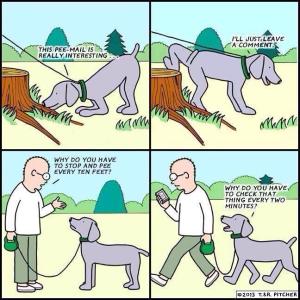 When going for a walk with my dogs, that is what I go to do – walk. Too often I see dog owners going out on a walk but the aim is to let the dog go to the bathroom. Now in some cases that may be the only way to do this as the owner lives in an apartment – but – the moment you begin to take your dog out and allow him to sniff at every lamp post, fire hydrant and tree, you are encouraging him to begin the habit of marking territory.

As a pack leader you should be the one guiding the way and setting the pace with your head up, shoulders back, exuding confident, calm. You take control and are head of the pack.

So before setting off on the actual walk take your dog into your yard or a place where you will not create neighborhood problems, and teach him the command to go to the bathroom. I say “Weewees” –.” You may say, “Get busy” or use some other cute non-common word to teach him the same. Now when you set off on your walk you know he does not have to cock a leg or she does not have to squat at every smell.

Dogs do give a squirt of urine to mark their territory. Their noses provide the most important information through scent. These “social messages” received through sniffing feces or urine will often prompt a dog to over-mark that scent with his own. They claim the territory with the scent. Often this results in dogs urinating far more than they need to, and even when nothing is coming out, they will still go through the motion of cocking their legs. Even females will mark with a quick squat. Some claim that a dog will communicate so much information through the smell of the urine that it is almost a dog database as they walk through the neighborhood.

Marking identifies territory to another dog or covers and masks the odors of dogs that have been there before. But what seems simple is actually a bit more complex than that. A male dog will go and mark where a female has been. Females will spread urine around when coming into their heat cycle, just to tease and let the “boys” know they are “ladies in waiting.” Sometimes a group of dogs will form a line to a “pee place.” When my two female dogs go out in my yard, often the older one will stand next to her younger friend and wait for her to finish urinating before she goes and squats on the same place. It’s a kind of “what’s yours is mine” mentality, or perhaps just a sign of friendship and bonding. Either way, it becomes a routine.

My dogs have never marked, and I have had many dogs throughout my life. If I have a dog from the time he’s a pup I do not let him mark. Not ever. I teach him to go to the bathroom on command and to eliminate completely in one or two goes. I have to add that because I occasionally breed them and produce a litter, they are not neutered. Now what does all this mean?

I believe it revolves around leadership. When a dog has an owner he can trust and believe in, someone who gives him what he seeks in life, who sets boundaries and limitations and provides discipline and direction, and builds good everyday habits, he look to that person for leadership. Dogs take leadership roles only when the owner does not. Some dogs have a natural dominance and want to be “king of the hill,” but most are looking for benevolent guidance and leadership. When we provide this in the early training of pups we teach them to go for a walk, not a marking circuit. We develop in the pup the desire to be with us, watch us, and be guided by us. We become the center focus for the dog.

I do believe that in some instances a marking dog is one that really lacks confidence and is attempting to say, “this is my territory – please keep away, I don’t want confrontation.” In other instances there is the dominant dog that says, “this is my territory and if you don’t want trouble then keep out of it.” And of course there are the ones where the owners have encouraged or allowed them to mark simply because they felt that is what dogs do.

I watch a dog and note the body posture, the tail, the stiffness of the back, the head position, and try to determine what the marking may be. In some it is definitely dominance – “I am here and letting you know.” With others it appears to be almost friendly – “Oh that smells nice; I think I will leave them a message.” Kind of like the Facebook for dogs!

What can be concerning is when the dog that begins to kick back with his hind legs after defecating or urinating. This is what I call “spreading the word.” A dog has scent glands between his paw pads and it is thought that in this way he is spreading his scent even more. As with marking, I dislike and don’t allow this behavior. For me it is a sign of dominance, an indication that this dog wants to be leader of the pack, and sees himself as independent with a will of his own. I have seen this mostly with the northern breeds. Nearer to the wild dog genetically maybe?

In most instances marking occurs because of lack of training, leadership and the development of good habits. Without realizing it, owners often place their dogs in leadership positions. The dog then believes he has to establish a territory and show he is the protector of all within it. This may go as far as marking in the house on personal belongings, even the owner’s bed. Once a dog has left a mark of territorial scent, you will find when he revisits the place he is almost “triggered” to mark again – an almost involuntary response to the smell. Then he gets into even more trouble than he was in before, which results in confusion in the dog and anger in the owner – energy that is anything but calm and assertive.

Elimination should be a function that is just that. Yes, dogs have to find the right spot but it does not have to be every tree, hydrant, post or other marked object. Take him in your yard or the usual place first, give him a command to eliminate and then once he has done his business, take him for his walk. He doesn’t go until he has eliminated. The walk should provide the joy of togetherness as you both tour your territory. Couple this with a consistent training routine to establish and reinforce a balanced relationship and you are not only on your way to having a nice mark-free, invigorating walk but a trusting, confident, healthy relationship too.